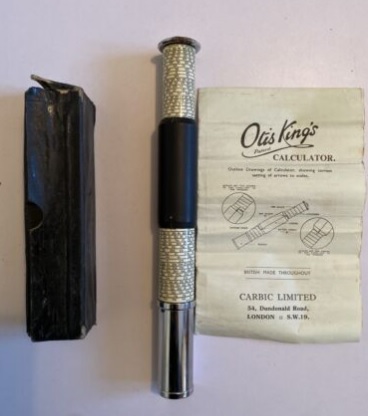 Manufacturer: Otis King Year:1960-1962
Info: With a log-scale decade length of 66 inches, the Otis King calculator should be about a full digit more accurate than a 6-inch pocket

The Geniac brand cylindrical slide rule sold by Oliver Garfield Company in New York was initially a relabelled Otis King; Garfield later made his own, probably unauthorized version of the Otis King (around 1959). The UK patents covering the mechanical device(s) would have expired in about 1941–1942 (i.e. 20 years after filing of the patent) but copyright in the drawings would typically only expire 70 years after the author's