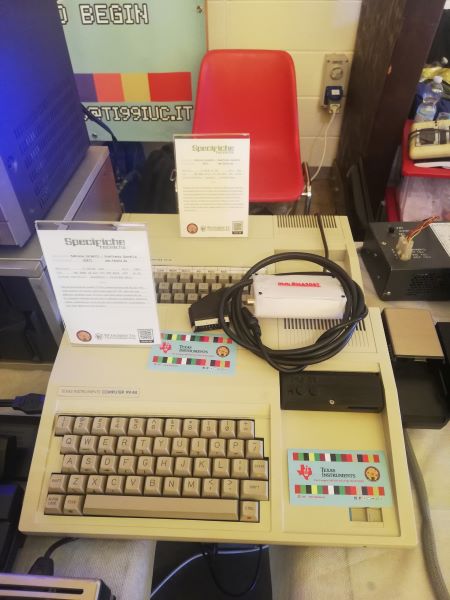 The TI-99/4 and TI-99/4A are home computers released by Texas Instruments in 1979 and 1981, respectively. Based on the Texas Instruments TMS9900 microprocessor originally used in minicomputers, the TI-99/4 was the first 16-bit home computer, and the associated video display controller provided color graphics and sprite support that was among the best of its era.

The calculator-style keyboard of the TI-99/4 was cited as a weak point, and TI's reliance on ROM cartridges and their practice of limiting developer information to select third parties resulted in a lack of software for the system. The TI-99/4A was released in June 1981 to address some of these issues, featuring a simplified internal design, full-travel keyboard, improved graphics, and a unique expansion system. At half the price of the original model, sales picked up significantly and TI supported the 4A with peripherals, including a speech synthesizer and a "Peripheral Expansion System" box to contain hardware add-ons. TI released developer information and tools, but the insistence on remaining sole publisher continued to starve the platform of software.

The 1981 US launch of the TI-99/4A followed the Commodore VIC-20 by several months. Commodore's CEO Jack Tramiel had once been offended by TI's predatory pricing during the mid-1970s, and retaliated with a price war by repeatedly lowering the price of the VIC-20 and forcing TI to do the same. By 1983, the 99/4A was selling for under US$100, at a loss. Even with the increased user base created by the heavy discounts, Texas Instruments suffered a US$330 million loss in the third quarter of 1983 and announced the discontinuation of the TI-99/4A in October 1983, with production ended in March 1984.

The TI-99/4 was intended to fit in the middle of a planned range of TI-99 computers, none of which were ultimately released but prototypes and documentation have been rediscovered after the TI-99/4A was discontinued.