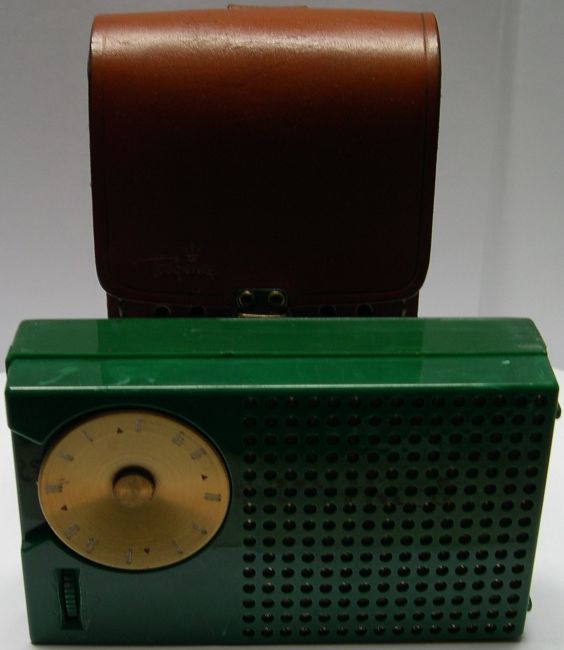 The first transistor radio hit the consumer market on October 18, 1954. The Regency TR-1 featured four germanium transistors operating on a 22.5-volt battery that provided over twenty hours of life. The unit weighed eleven ounces and cost $49.95. How did Texas Instruments feel in early 1954 with a germanium transistor in hand? No major radio manufacturer was willing to include it in their catalogs. Although Raytheon had managed to mass-produce the first transistor in the previous year, RCA, Sylvania and Philco were not ready to adopt the new transistor. But something changed in June when TI signed a joint venture with Regency to bring a radio for the Christmas market into production. Initially four colors were offered in the 3 "x 5" x 11/4 "imitation leather case: black, ivory, mandarin red and cloud gray; soon they were followed by mahogany and forest green.

BACK THEN, LOOKING FORWARD
"Regency was a thorn in the side of the industry which in-turn stimulated the practical application of the transistor" quote from Regency/TI patent attorney Frank Mascarich
IBM CEO, Thomas J. Watson, Jr, saw transistors as the future of computers, and ordered that IBM build no more machines with tubes after June 1, 1958. But his designers had been reluctant to embrace the new technology. Watson bought and handed out numerous Regency TR-1's to set an example for IBM employees. Whenever engineers complained to Watson about the decision, he just gave them a TR-1.
"Texas Instruments vice president, Pat Haggerty, had the revolutionary notion that he could put the transistor into every home - by building the transistor radio...Ten years later, Haggerty decided he could put the microchip into every household as well" quote from THE CHIP

TODAY, LOOKING BACK
Steve Wozniak quote: "My first transistor radio...I loved what it could do, it brought me music, it opened my world up"
Bill Gates quote: "Without the invention of the transistor, I'm quite sure that the PC would not exist as we know it today"
PHYSICS TODAY book review of CRYSTAL FIRE, the history of the transistor: "....the story not only of one of the greatest inventions of the 20th century but of the birth of the information age."
FORTUNE magazine quote: "For perspective, remember that the transistor, arguably the most important invention of the 20th century, came out of Bell Labs in the late 1940s as a clunky device of wire, gold foil, glue, and other components. The first transistorized consumer product, the Regency TR-1 radio, went on sale Oct. 18, 1954, and sold out almost immediately. If you owned one, you were the coolest thing on two legs."