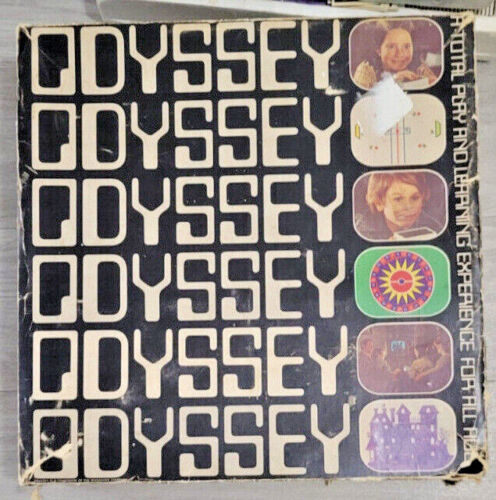 The Magnavox Odyssey is the first commercial home video game console. The hardware was designed by a small team led by Ralph H. Baer at Sanders Associates, while Magnavox completed development and released it in the United States in September 1972 and overseas the following year. The Odyssey consists of a white, black, and brown box that connects to a television set, and two rectangular controllers attached by wires. It is capable of displaying three square dots and one line of varying height on the screen in monochrome black and white, with differing behavior for the dots depending on the game played. Players place plastic overlays on the screen to display additional visual elements for each game, and the one or two players for each game control their dots with the knobs and buttons on the controller in accordance with the rules given for the game. The console cannot generate audio or track scores.

The Odyssey console came packaged with dice, paper money, and other board game paraphernalia to accompany the games, while a peripheral controller—the first video game light gun—was sold separately.

The idea for a video game console was conceived by Baer in August 1966. Over the next three years he, along with Bill Harrison and Bill Rusch, created seven successive prototype consoles. The seventh, known as the Brown Box, was shown to several manufacturers before Magnavox agreed to produce it in January 1971. After releasing the console through their dealerships, Magnavox sold 69,000 units in its first calendar year and 350,000 by the time the console was discontinued in 1975.

The console spawned the Odyssey series of dedicated consoles as well as the 1978 Magnavox Odyssey 2. One of the 28 games made for the system, a ping pong game, was an inspiration for Atari's successful 1972 Pong arcade game, in turn driving sales of the Odyssey. Patents by Baer and the other developers for the system and the games, including what was termed by a judge as "the pioneering patent of the video game art", formed the basis of a series of lawsuits spanning 20 years, earning Sanders and Magnavox over US$100 million. The release of the Odyssey marked the beginning of the first generation of video game consoles and was an early part of the rise of the commercial video game industry.